Fight continues to save lives as Overdose Awareness day marked 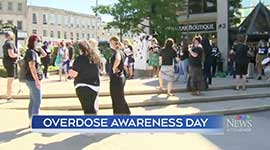 They say in the last three years, there’s been an 81 per cent increase in suspected opioid occurrences in OPP jurisdiction and provincial police have saved 170 lives by administering naloxone to people. OPP began carrying naloxone in September 2017.

“Opioid overdoses continue to claim the lives of thousands of people across Ontario and Canada. The statistics and numbers do not capture the profound distress being felt by those impacted,” OPP say.

More than 100 people met at St. George’s Square for the event to share deeply personal stories. The group drew chalk outlines in the square to represent the lives lost to the growing epidemic.

Denese Renaud laid down a flower in memory of her daughter in one of the chalk outlines. Before her daughter died last fall, Renaud and her family knew nothing about her daughter’s battle with prescription drugs.

“It took me to my knees. It was the greatest gut punch I ever had. I battled cancer easier than I battled that,” she says.

“Support not stigma” was the theme for this year’s event, as organizers say addicts come from all walks of life.

So far this year in Guelph, organizers say that there have been 15 overdose deaths, nearly double the amount of last year’s seven overdose fatalities.
Waterloo regional police say that emergency services have responded to 779 overdoses in the region to date this year. 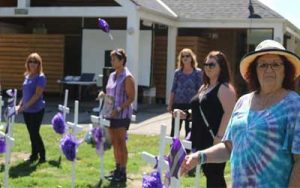 Mothers who have lost their children to the opioid crisis, from the group Moms stop the Harm, set up tables by the 29 white crosses representing people lost to opioid overdose in the city.

“I lost my daughter to addiction, Aug 11, 2018,” said Gail Parry “She didn’t overdose, but she was on life support and in a coma from an infection all throughout her body from substance use.”

Parry wants to draw attention to the issue of overdose and substance use impacting, not just substance users, but also their friends and families. She wants people to understand that addiction isn’t connected to upbringing or economic status.

Carolyn King, harm reduction co-ordinator for PARN, said they were there to help with a pop-up naloxone training area and to provide free naloxone kits for people who want them.

“I believe the total for the COVID losses in our community remain at two and it is still making municipal, provincial and national news,” she said. “We are asking that our community and our province and our nation give the same sort of attention to this crisis, which is claiming 10 times the people.”

In a media release, the City of Thunder Bay’s Drug Strategy noted that 142 people in the city have died due to opioid poisoning in the last five years, with 35 of those deaths occurring in 2019.

Part of NorWest’s IOAD event on Monday included displaying 35 balloons with placards at its Simpson Street location, representing those who died in 2019.

New drug policies — including legalization — and the removal of stigma associated with drug use are the keys to preventing drug overdose deaths in Thunder Bay, and across Canada, the supervisor of consumption and treatment services with NorWest Community Health Centres Brad King said Monday.
He encouraged everyone to carry naloxone, which can be used to reverse an opioid overdose, in the event they see one happening.

Police are also reminding people never to use drugs alone, carry naloxone and call 911 if you suspect an overdose.